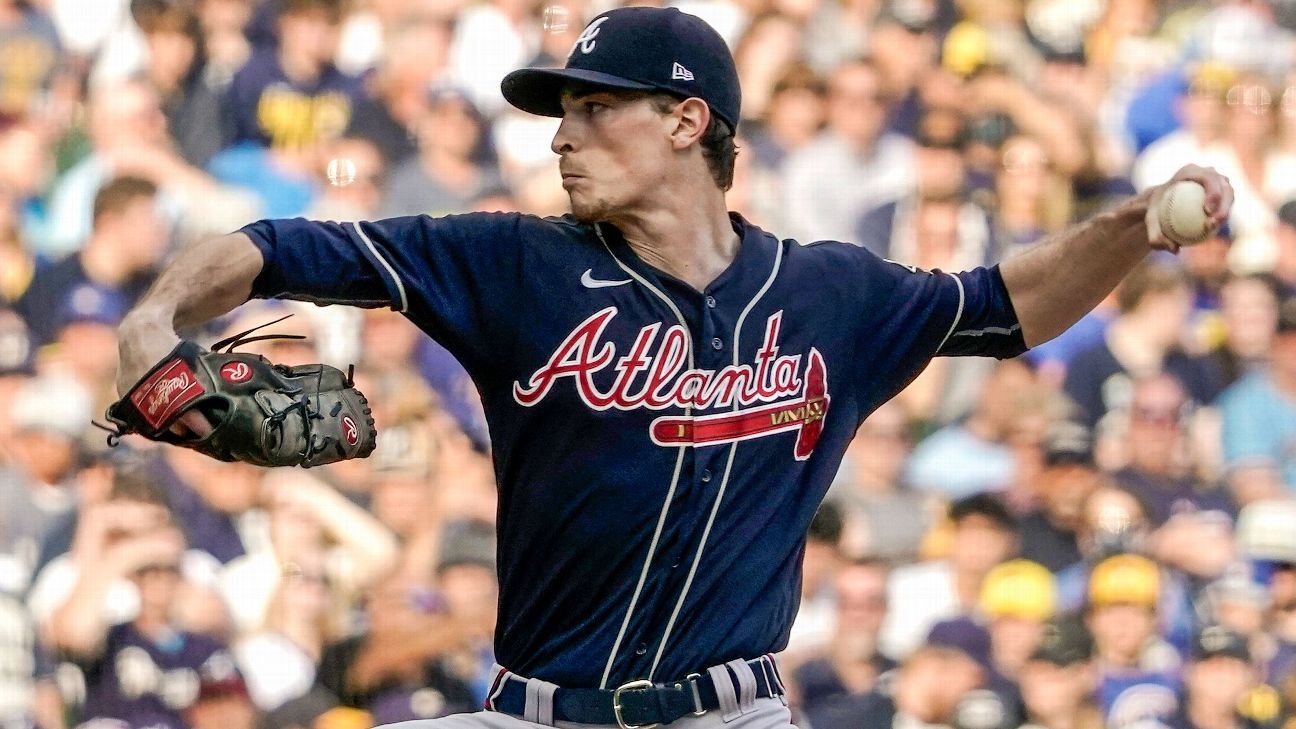 MILWAUKEE — In a series chock full of dominant starting pitching, it’s hard to stand out. But Atlanta’s Max Fried did just that on Saturday, and with his latest gem, the Braves are headed home with a split.

Fried shut out the Brewers over six innings on Saturday, striking out nine as Atlanta held off the Milwaukee Brewers 3-0 in Game 2 of the NLDS. The series is even at a game apiece with Game 3 slated for Atlanta on Monday.

Milwaukee barely threatened during Fried’s outing, which ended after 81 pitches when Atlanta manager Brian Snitker sent pinch-hitter Joc Pederson to the plate in the seventh. The Brewers managed just three hits against Fried, and only Willy Adames, who doubled, reached second base.

“It was fun to watch,” Snitker said. “He’s fun to watch when he’s got it going, because he pitches. I mean, he’s got the arsenal, the assortment. Spins the ball so well. And it was a great outing.”

All four starting pitchers during the first two games at American Family Field lived up to their billing. Those starters — Atlanta’s Charlie Morton, followed by Fried, along with Milwaukee’s Corbin Burnes and Brandon Woodruff — combined for four quality starts. Collectively, the quartet posted a 1.88 ERA, allowed a .157 batting average and struck out 11.6 batters per nine innings.

Among all those terrific outings, it was perhaps Fried’s that stood above the rest, and that was crucial in a series during which runs have been exceedingly hard to come by.

“The stakes might be a little bit higher, but to go out there and make the pitch that you’re supposed to make, that’s going to trump all,” Fried said. “For me to just go out there and simplify it as much as I can and attack the glove and stay on the attack rather than nibble, that was the only thought I had.”

The Braves were able to piece together a two-run rally in the third inning against Woodruff, getting a double from Jorge Soler, followed by Freddie Freeman’s RBI single and then a double off the top of the fence from Ozzie Albies that scored Freeman. Austin Riley added an insurance run with a solo homer off Woodruff in the sixth.

And that was it for offense on the day. Over the first two games, the clubs have combined for six runs. Milwaukee won Friday’s game 2-1.

“I have to go back [to] look at it, but I didn’t think there was a lot of pitches to hit again,” Brewers manager Craig Counsell said. “And that’s a credit to their pitcher. You know, against Fried, I thought Fried threw the ball really good.”

While all four of the starters in the series have been strong for most of the 2021 season, even entering Cy Young chatter at various times, no starting pitcher has been hotter than Fried.

According the ESPN Stats & Information research, over the second half of the season, Fried has posted the best ERA in the majors (1.64), along with the best WHIP (0.83), and ranks second in opposing OPS (.511) and batting average (.188). He has been even hotter of late, with a 0.31 ERA and 0.48 WHIP over his past four outings, including Saturday’s game.

With his latest performance, Fried joined an exclusive list of hurlers with more than one career postseason start of six or more scoreless innings without a walk, joining Hall of Famer Christy Mathewson, along with John Lackey, Chris Carpenter and Walker Buehler.

“It was unbelievable,” Braves reliever Tyler Matzek said. “He’s been doing it for the last month and a half, actually for the last half of the season. He’s been going out there, going deep in the games. And it’s helping the ‘pen set up so we know what we need to do when he’s out of the game.”

The drama in Saturday’s game came only after Fried departed. The Brewers got two runners on base against the Atlanta bullpen in each of the last three innings, but the Brewers couldn’t come up with a big hit to close the gap.

With the pitching stringing together zeros as they have over the first two games, that has been the decider in both contests: One team is able to capitalize on a rare opportunity, while the other one can’t.

“[Fried] made some pitches when he had to,” Brewers outfielder Christian Yelich said. “He did a good job throwing everything for a strike and kind of keeping us off balance. We didn’t really have much going on there for the first few innings. Got some traffic toward the end and just couldn’t get a big hit when we needed one.”

Fried has started to compile an impressive postseason resume. After working from the Braves’ bullpen during the playoffs in 2018 and 2019, over the past two postseasons he has posted four quality starts in five outings with a 2.43 ERA.

This could create an interesting dilemma for Snitker if the series goes long. Snitker has not revealed his plan for a Game 4 starter, and even suggested a bullpen game is a possibility. However, if there were a Game 5 on Oct. 14, Fried would be lined up to pitch on normal rest.

The dilemma: Braves Game 1 starter Morton also has an impressive postseason résumé, and it’s a lot more extensive than that of Fried. He’d be lined up with extra rest to start a Game 5. So might Snitker push Morton up to start on three days’ rest in Game 4, knowing he has Fried in reserve for a winner-take-all Game 5? And did that have anything to do with Fried leaving after 81 pitches Saturday?

If Snitker was thinking along those lines, he wasn’t revealing it after Saturday’s game, saying his early removal of a rolling Fried had nothing to do with what might come later in the series.

“I didn’t take him out because I was thinking about anything other than winning today’s game,” Snitker said. “And I just thought that after Max went through that [sixth] inning that he probably mentally more than anything was ready to [come out].”

Of course, before any of that moves to the forefront, the teams have Game 3 to contend with. For now, the continuing excellence of Fried makes that theoretical Games 4 and 5 dilemma a good problem for the Braves to have.

Besides, the real problems in this series all belong to the hitters — for both teams.

“It’s two really well-rounded, solid clubs going at it,” Snitker said. “Today we got some big hits. And it was another really good ball game. Just exciting, I know that.”