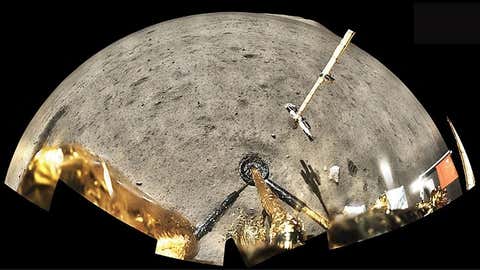 A fish-eye view of Chang’e-5’s landing site. The mission collected and shipped back to Earth 2 kilograms of lunar rock.

In December 2020, Chang’e-5 lander brought back about 1,731 grams of lunar samples from the moon.

The mission—the first ever by a Chinese team—used only tiny fragments to confirm predictions about the Oceanus Procellarum region, where the spacecraft had landed, Nature reported.

At about two billion years old, the samples reveal volcanism that is at least a billion years younger than any found by NASA’s Apollo astronauts or by the Soviet Union’s uncrewed Luna missions in the 1960s and 1970s.

“This is the youngest-ever lava flow dated from the Moon,” Katherine Joy, a planetary scientist at the University of Manchester, UK, was quoted as saying.

The findings, published in the journal Science, fill a vital gap in the Moon’s geology, and will also help scientists to understand the history of other Solar System bodies, the report said.

On 1 December 2020, Chang’e-5 lander descended on the volcanic Mons Rumker area in the Oceanus Procellarum region. It spent the next two days examining its surroundings and gathering the samples with the help of its camera, spectrometer, radar, scoop and a drill.

The probe also withstood temperatures of over 100 degrees Celsius on the lunar surface.

Oceanus Procellarum, a Latin term which means ‘Ocean of Storms’, stretches 2,500 kilometres from north to south on the Moon’s near side. It is thought to contain young solidified lava, which is an indication of relatively recent volcanism on the Moon, the report said.

While no mission had landed at Oceanus Procellarum earlier, samples returned by the Apollo and Luna programmes had provided evidence of volcanic eruptions on the Moon stretching back more than 4 billion years, with the majority occurring between 3.8 billion and 3 billion years ago.

The findings provide a vital data point about the history not just of the Moon, but of the wider Solar System too. By knowing the exact age of Oceanus Procellarum, and matching that to the number of its craters—which accumulate over time as impacts occur—scientists can infer that locations on other worlds, such as Mars, where similar numbers of craters are of comparable age, the report said.

The above article has been published from a wire agency with minimal modifications to the headline and text.