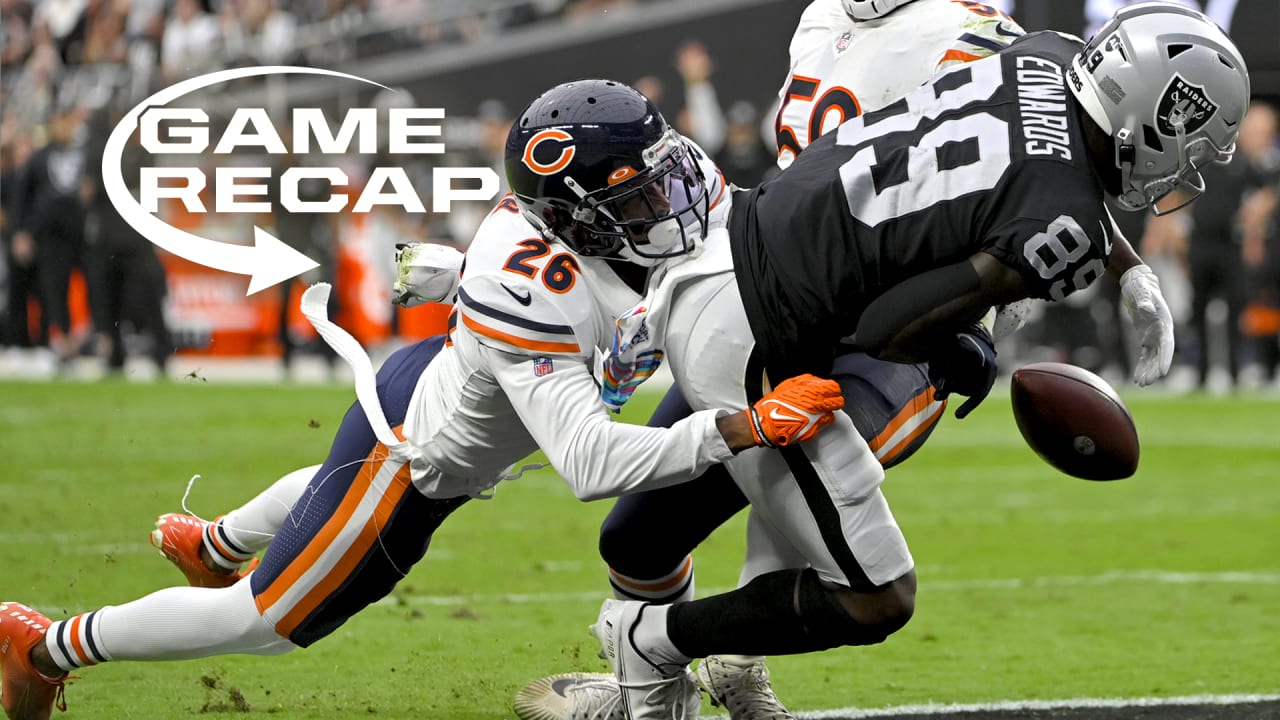 Justin Fields competed 12 of 20 passes for 111 yards and his first NFL touchdown while posting a 91.9 passer rating in his first game after being named the Bears’ starting quarterback moving forward.

Khalil Mack delivered a monster performance against his former team. The perennial Pro Bowler recorded one sack, drew a penalty that nullified a touchdown, made a key fourth-down stop and registered another sack on a two-point conversion play.

Here’s what transpired throughout the game:

The Raiders took a 3-0 lead on Daniel Carlson’s 31-yard field goal with 4:00 left in the first quarter. The kick came after Josh Jacobs’ apparent 2-yard touchdown run was nullified by a holding penalty on tight end Foster Moreau versus Mack.

The Bears answered with a 10-play, 72-yard drive capped by Fields’ first NFL touchdown pass, a 2-yarder to Jesper Horsted, that gave them a 7-3 lead early in the second quarter. The Raiders committed three penalties on the drive, including two for roughing the passer.

The Bears defense then forced the Raiders to turn the ball over on downs at the Chicago 27 as Roquan Smith dropped Derek Carr for no gain on third-and-1 and Mack stuffed Jacobs for no gain on fourth-and-1.

The Bears took a 14-3 lead as Williams juked cornerback Amik Robertson on a 4-yard touchdown run with 1:56 left in the first half. The run capped a 16-play, 86-yard drive that burned 8:17 off the clock.

Fields exited with an injury on the drive after being sacked by Yannick Ngakoue and was replaced by Andy Dalton. Fields was examined in the medical tent but returned to the game after missing only three plays.

In the first half, the Bears rushed for 98 yards on 20 carries behind a strong performance by their offensive line, with Williams gaining 51 yards on 11 attempts and Herbert adding 44 yards on seven carries.

The Bears registered the game’s first takeaway on the Raiders’ second possession of the second half when DeAndre Houston-Carson intercepted a long Carr pass that was intended for receiver Zay Jones.

The Raiders eventually cut the deficit to 14-9 on Jacobs’ 1-yard TD run with 9:01 left in the fourth quarter. Mack sacked Carr on the subsequent two-point conversion. The TD capped a 16-play, 74-yard drive that took 8:19. Carr was injured on a third-and-1 quarterback sneak on the drive and replaced by Nathan Peterman. But Carr returned after sitting out four plays.

The Bears responded by increasing their lead to 17-9 on Santos’ clutch 46-yard field goal with 2:45 to play in regulation. The drive was sustained by Fields’ 13-yard pass to Darnell Mooney on third-and-12 from the Chicago 27.

The Raiders turned the ball over on downs as Carr threw incomplete over the middle on fourth-and-5 from the Las Vegas 30 with 1:55 left.

Santos followed with another 46-yard field goal, widening the margin to 20-9 with :56 remaining.