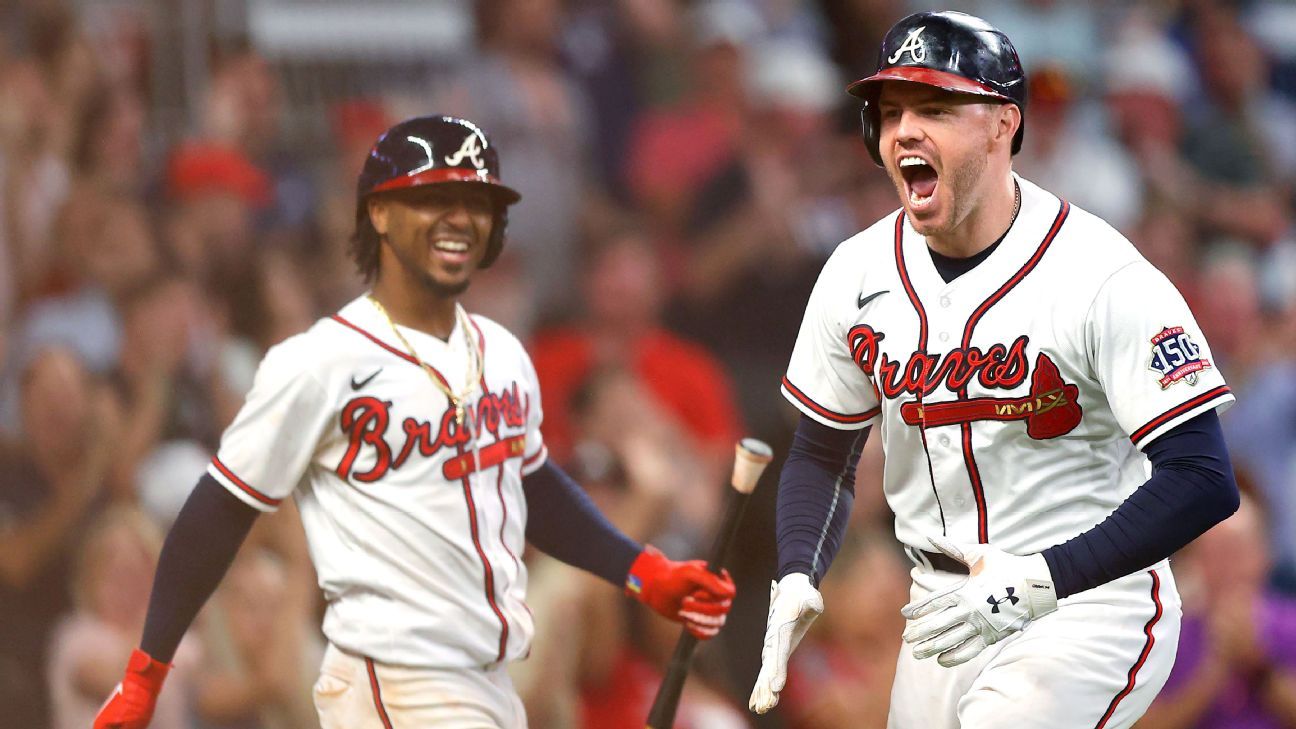 The Atlanta Braves are headed back to the National League Championship Series for the second straight season, and they go there in dramatic fashion.

The Braves’ Freddie Freeman hammered a two-out, first-pitch homer to center field in the bottom of the eighth off Josh Hader, the Milwaukee Brewers’ All-Star closer, lifting Atlanta to a 5-4 come-from-behind win on Tuesday, closing out the NL division series in four games.

“I’ve had a lot of cool moments in my career, but so far I think that’s going to top them right there,” Freeman said. “But hopefully that’s not the last cool one.”

Freeman’s heroics ended a back-and-forth affair in which the Braves and Brewers combined for nine runs — the total number of runs they scored together during the first three games of a well-pitched series.

Though Freeman is the face of the Braves franchise, the reigning NL MVP and possibly a future Hall of Famer, his homer off Hader was a stunner.

“Against him, in my whole career, I just look location, because he throws all those heaters up,” Freeman said. “Was I looking for a [first-pitch] slider up? No. I was just kind of looking up. … I kind of looked up and away in location, and he threw it there and I was able to get it.”

Hader, one of the most dominant relievers of his generation, had never allowed a postseason homer and hadn’t allowed a run of any kind since July 28. He had allowed just seven homers to left-handed hitters during his regular-season career and none since Sept. 12, 2020, when the Chicago Cubs’ Jason Heyward did it.

However, one of those seven lefty-lefty homers: Freeman hit a game-winning homer off Hader in the 10th inning of a game in Atlanta on May 18, 2019.

The stakes this time were a whole lot higher.

“[Hader] had to pitch in the game, and it was the right part of the lineup for him to pitch to,” Brewers manager Craig Counsell said. “And it was our best against their best. I don’t think you regret having that situation.”

The Brewers jumped on top early with a two-run fourth on RBI hits by Omar Narvaez and Lorenzo Cain, as Milwaukee snapped an 0-for-20 drought in the series with runners in scoring position.

Atlanta came right back with two in the bottom of the fourth thanks to Eddie Rosario’s two-out, two run single.

Milwaukee grabbed the lead right back in the fifth on a massive two-run homer from Game 1 hero Rowdy Tellez, who clubbed a 448-foot shot into the forest and water display beyond the center-field wall at Truist Park.

The Braves matched that with two in the bottom of the fifth.

From there, the series reverted to form, as the bullpens for both teams strung together zeros, setting the stage for Freeman.

“You can’t make that up,” Braves manager Brian Snitker said. “I had so many things going on in my mind when that happened, when he hit that ball.

“It was like the perfect ending. Unbelievable. And God, I don’t know if I’ve ever been involved in a game like that, just the intensity and everything that went on, and back and forth. My God. It was something else.”

Freeman became the first player in Braves history to hit a go-ahead home run in the eighth inning or later of a series-ending win, according to ESPN Stats & Information research.

“You just have to hope [Freeman] swings at the first pitch and gets himself out,” Brewers righty Brandon Woodruff said. “He’s so tough. And the fact that he was able to hit that ball where he did, and hit it out the way he did on a slider, you tip your hat to him. He’s an incredible baseball player.”

With the clincher, Atlanta has now earned back-to-back berths in the NLCS for the first time since a five-year streak ending in 1999.

Last season, Atlanta fell one game short of the World Series, losing Game 7 of the NLCS to the Los Angeles Dodgers in a neutral-site game in Arlington, Texas.

The Braves might get a chance to avenge that loss, as they await the winner of the San Francisco Giants-Dodgers series on the other side of the NL bracket.

“I think we’re in a lot better position now than we were a year ago,” Snitker said. “And we were a game away from getting to where we wanted to go last year. I like our chances.”