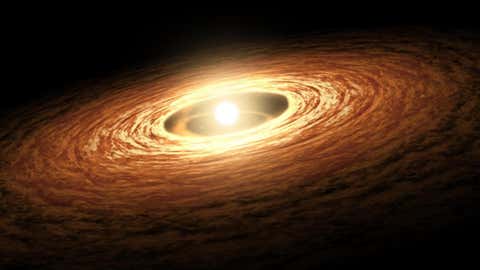 Representative Image: Artist’s rendering of a young, Sun-like star encircled by its planet-forming disk of gas and dust.

If you think our solar system is unique, think again! While it might be special for being the only known system to host a planet with life, it’s very typical in terms of other features like multiple rocky and gaseous planets orbiting one host star. There are billions and billions of galaxies and star systems scattered around our ever-expanding universe. And yet, some are exceptionally unique!

Scientists have already discovered myriad intriguing worlds, but very few could match the peculiarity of this bizarre system that astronomers have spotted recently. This is a stellar system with not one but three stars bound together. What more? This system could be hosting just one giant planet like Jupiter that orbits all three stars.

An exoplanet is any planet that is outside our solar system. So far, more than 4,500 exoplanets have been discovered. Most of them possess bizarre features—scorching temperatures to no minerals to extreme winds—and finding potential life conditions on them appears next to impossible. Each time scientists look closer to discover more about outer systems, they encounter systems with completely alien features.

This three-star system is located about 1,300 light-years away, perched on the constellation of Orion. This intriguing system came into light early last year when astronomers studied the Orion constellation using the Atacama Large Millimetre/submillimetre Array (ALMA) and the Very Large Telescope (VLT) of the European Southern Observatory. 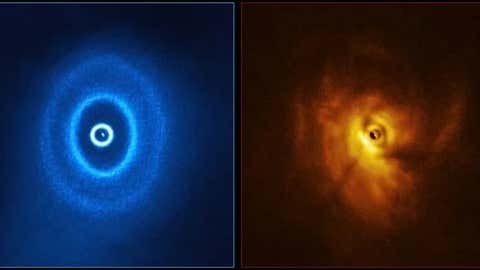 An image of GW Orionis, a triple star system with a mysterious gap in its surrounding dust rings. (ALMA

Using this sophisticated telescope, scientists found three dust rings around GW Orionis with a large gap. The team hypothesised possible reasons for this gap. One possible explanation was that the gravitational torque exerted by the three stars led to the opening, while the other cause could be the formation of a giant planet.

Several calculations and 3D simulations of the mysterious gap in the star system’s rings suggested the latter case. This whole theory is yet to be confirmed by scientists. If confirmed, this could prove that planets can form under conditions very different from what we assumed until now.

“It’s really exciting because it makes the theory of planet formation really robust. It could mean that planet formation is much more active than we thought, which is pretty cool,” said Jeremy Smallwood, lead author of this study. After getting these remarkable insights, the team is set to conduct further observations to confirm the presence of planet(s).

Astronomers are on the continuous hunt for planets—especially like Earth—beyond our solar system. Studies suggest that there could be as many as 30 crores of such exoplanets scattered around our Milky Way galaxy alone. And some of these may have similar conditions to that of Earth.

But, finding that unique world with the perfect blend of life-like conditions remains a distant dream.

The results of this study were published in the journal Monthly Notices of the Royal Astronomical Society last month and can be accessed here.

For weather, space science, and COVID-19 updates on the go, download The Weather Channel App (on Android and iOS store). It’s free!